The United States of America.

Doesn't feel so "United" right now, does it? If you've watched the news, logged into social media, or just visited the internet in the past 2 years, then you're probably more than aware of the ideological divide in America these days.

I think one of the first and foremost issues at hand, is that Americans have forgotten what exactly an  American looks like. In today's world of hand-picked news, feedback loops, and "safe spaces", it's become effortless to only see and hear those people that you agree with. Suddenly your preferred image and audience is easy to see and anything else that challenges your views can be simply blocked, removed, or unfollowed. It becomes easy to believe that a "real American" is someone who looks, talks, and thinks a lot like you do.

As a man raised in the mountains of West Virginia who now lives in a beach neighborhood of Los Angeles, I've gotten to witness firsthand the clash of two dynamically opposed cultures.

The city man has difficulty understanding why the country man hates welfare programs, without knowing country man earned his home working overtime in plants/mines for years to afford his 20 acre ranch all on his own. If money is tight, he's been taught how to survive. He knows how to farm, how to hunt & fish, how to can and store food. He has a right to be proud of his accomplishments.

Yet, the country man has difficulty understanding why the big city man collects food stamps. Even though he earns more than country man, hes putting in overtime too, and still living paycheck to paycheck after paying $2000 a month for a rental apartment he'll never own. It has an extra bedroom for his 2 kids to share. Even still, he knows they're in a terrible school district but it's the best he can do for now and this lifestyle is all he's ever known.

Beyond this basic generality, we have even more local and regional quirks that make us unique. I have been fortunate in recent years to travel much of America and I have to tell you, I was shocked to learn how much more diverse America was than I had grew up believing.

The disparity among the American populace is stunning. What a hodge-podge of ideas and beliefs! In these recent times however, many main-stream media outlets, politicians, Facebook warriors, and even other nations have focused on these contrasts and used them to divide and manipulate us.

"Hey West Virginia! These Liberals think renewable energy is better than YOUR coal!"

"Hey North Dakota! These pot-smoking hippies in Colorado are letting Mexicans into YOUR country!"

The topic of these talking points and whatever belief you hold is besides the point. The matter at hand is... something here probably triggered you. They cater to a basic human instinct, a desire to be outraged. We eat this stuff up, thrive on it, and powerful people have begun to notice. We are being positioned against each other. Steady but surely, we are becoming "The Divided States of America."

The implications of this are terrifying for our country, but for me, the ones that scare me the most exist outside of our borders.

Americas enemies across the world now see a new era rising. A massive opportunity to chisel away the United States' dominance. As our ugly public war trudges on in front of the global audience, the word "American" is turning sour in the mouths of those that utter it, our reputation deteriorating at a rate faster than in any point in history.

There are many nations that want to see this continue, they want to see us divide and become less powerful and respected. As we busy ourselves fighting a divisive war internally, they are swooping in on every American pull-back and failure.

Perhaps the most dangerous force in the world, Russia's Army of Trolls churns out propaganda daily, creating and sensationalizing juicy headlines to hungry audiences while Putin longingly licks his lips, praying that just maybe the U.S.A is as easy to disassemble as Eastern Ukraine has been.

China, while appearing less menacing, quietly enters the room every time America pulls out of another trading pact or economic agreement.

If we want to preserve whats left of Americas reputation and global leadership, we are going to have to start with ourselves first, because frankly — you look like shit, America. Yes, you're looking rough around the edges, but, like anyone who's woken up the morning of the 5th of July knows, with a little rest from all the toxic sludge you've ingested, and some TLC, you can be looking fresh in no time.

If we lose the most important part of our beloved nations name, the "United", then we lose "America" too. We lose the identity that has inspired humans the world around, the identity that gained us the respect of a planet and allowed us to become the leader of the free world, an identity founded by the people, for the people! We need to come together, we need to respect each others opinions, and where differences are found,  embrace them rather than destroy them!

Of course we wont all agree on every topic, and that is why as democratic citizens we are given an extraordinary tool to express our convictions: voting. Voting is the most American thing we can do. It is why we have been so successful at running this massive nation as long as we have. We are a nation of many, many types of people living in differing environments and cultures. This is what has always made this "great American experiment in democracy" so, well... great. When we cant agree, we put it to a vote.

Even so, this honored privilege is coming under attack from foreign influences. In today's world, it is very easy to affect a persons mind from anywhere, and it's likely you've already been exposed without ever knowing it... so how do you recognize who or what is being influenced from malicious foreign sources?

I'll give you a secret that you can always trust:

We must do everything in our power to protect the vote. We must instill the honor and integrity the vote deserves. We must use our votes to remove the politicians that divide us and replace them with candidates who value country over party. And if your candidate doesn't win... well... respect the vote. 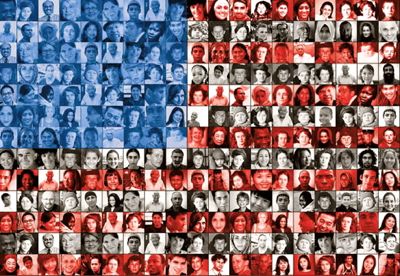 Let's save all the hate talk, let's no longer separate our friends or family by their political views, or their convictions. Save it for the vote. Remember that your personal brand of American is not the same as anothers. When you find a contrasting opinion, lift that person up rather than shut them down. Invite them to dinner! How much more powerful of an impact can you make on a person by respecting their beliefs and befriending them, even when that person knows you vehemently disagree? Or you could do exactly what our enemies want — bash them in the comments and tell him/her how unintelligent you feel that they are.

I'm by no means innocent of this, and I am certainly not a saint worth following in these respects, but I promise you this friends, from here on out... I'm going to try my damnedest.

Will you try with me too, for 'Murica?

Popular posts from this blog

Finding God - Free Will and The Multiverse

May 01, 2018
Finding God Free Will and The Multiverse There is a rarely a night I fall asleep without having read every new Science article on Google News. For me, it's comparable to those countdown calendars you get for Christmas, but instead of fueling a sweet tooth with a nightly treat of chocolate, I get to fuel my curiosity. I can't get enough of it. Many of the concepts are too technical or advanced for me to fully grasp, but it sure doesn't stop me from trying. There is one theory that has ensnared my imagination these days, one that has become omnipresent in my mind—the Theory of the Multiverse. If you aren't familiar, allow me to attempt a brief explanation. Multiverse Theory has many variations but, at it's core, is the belief that our universe is but one universe among infinite universes, all existing simultaneously. All space, matter, and energy that has ever existed makes up these many universes. Now for the time being, there is no way to test this th
1 comment
Read more

I AM A FUCKHEAD

May 07, 2018
I've always been told I learn everything the hard way, and looking back on my life thus far, I couldn’t agree more. I used to feel resentment about this aspect, imagining I was being picked on by some higher power, a bully with a magnifying glass on little Jared Ford. Ha!   Alas, I seem to have entered into a new phase . Whether that is because of changes I've been trying to implement, or just an inevitability of aging, I can't be sure, but I finally feel that I’m gaining the ability to recognize potential for growth within my mistakes. It’s taken 26 years, but maybe I know why this obstacle-ridden road has been my path — to teach others. If I’m going to constantly stumble through life, the least I can do is try to shed light on a few metaphorical bridges I’ve traveled that were missing a plank or two, and hopefully, prevent you from stumbling yourself. Now, I could tell stories about my many shortcomings for days on end, but I’d like to share a little
6 comments
Read more

December 14, 2018
REVELRY By: Jared Ford rev•el•ry ˈrevəlrē noun Lively and noisy festivities, especially when these involve drinking a large amount of alcohol. "Sounds of revelry issued into the night" A better definition could scarcely be found Agreed every irritated neighbor around I awoke to the thunder that ended my slumber Who creates such a riot, I suffered to wonder The wild things are here And with them, comes fear Fear of the roars, and thumps in the night Echoes of monsters who scream their delight How peculiar, how odd, why here? Why now? What stirs their heart to arouse such a howl? The wild things I hear As I slowly draw near Their beastly attire, gleams ever brighter As the fire spins higher, their eyes do inspire They dance with such glee, their spirit carefree How enticing for me, this uncouth jubilee… The wild things I’ve seen Don’t appear all that mean Into the light, I announced my arrival A dozen kind sm
1 comment
Read more

A Quest for Adventure (or) A Yellowstone Education

September 05, 2017
We should have known anything called Devils Slide wasn't going to be a cakewalk... but there we were, down to our last ounces of water, crawling over decade old skeletons of antelope, elk, and bears, peering over the edge of yet another sharp precipice. A branch hit my hat and I watched it slip off my head and fall through the air. My heart sank, my aching legs complaining with the realization that they would be hiking back up this peak once again... but I'm getting way ahead of myself! let's go back to the beginning! Day 1 Thursday morning, a decision was to be made. Stay home in L.A. and enjoy a long Labor Day weekend... or , drive all through the night and next day to Montana, on a whim, with only one goal in mind: collect as much information on Forrest Fenns hidden treasure from the Yellowstone locality as possible. We chose adventure! After a hasty pack, we were on the road. We made it deep into Utah before pulling over to get some rest. I really cou
6 comments
Read more